‘Baaghi’ is an action film all the way, with martial arts sequences. Ronnie (Tiger Shroff) and Siya (Shraddha Kapoor) meet on a train and fall in love. Raghav (Sudheer Babu) gets obsessed with Siya and impresses Siya’s father (played by Sunil Grover) with his ill-gotten billions and goes so far as to take Siya hostage to convince her to marry him. ‘Tiger Shroff’ excels. You can see the amount of effort that has gone into making the intricate action sequences come alive. They are choreographed to showcase what Tiger Shroff can do. And he delivers! As a dancer, Tiger has tremendous grace and lights up the screen with his energy. His dance moves were welcomed by the squeals of teen girls in the multiplex where I watched the film! The raw intensity Tiger exudes in the sequence when he rescues a kid from a gang that has abducted him or in the scene when he breaks down after cremating someone dear shows how much more he can deliver as an actor, with the right script and director. While his looks, easy charm and dialogue delivery are reminiscent of his father ‘Jackie Shroff’, in some scenes he reminds one of a young Sanjay Dutt is the post-Naam phase.

#ShraddhaKapoor plays a character quite similar to the one in ‘Ek Villain’, except this one is capable of neutralizing dreaded gangsters. Her smile, screen presence and the rain dance add a lot to the film. She has little else to do though. Shifuji Shaurya Bhardwaj, as Tiger Shroff’s guru impresses. This doesn’t seem like his debut at all.

The casting doesn’t always work though. Sudheer Babu (playing Raghav, the antagonist) is a competent actor but seems miscast here. He doesn’t appear anywhere as dangerous as he is made out to be. A lot more drama and euphoric moments could have made the film work even better. The interval could have been at the point where Tiger’s close-up appears after his passport is stamped. His return towards the end could also have been delayed and played up to enhance the drama. The director, Sabbir Khan, delivers, in his third film (his second consecutive film with Tiger Shroff). The cinematography by veteran Binod Pradhan is flawless. The background score goes well with the mood of the film, especially a haunting score that plays at key moments. Some of the songs have already caught on and will probably be more of a rage as the film holds its own at the box office.

There was some controversy over the similarity between ‘Baaghi’ and ‘The Raid: Redemption’ and the climax does seem inspired from that film, with Tiger Shroff battling goons on every floor to reach the top of a skyscraper so he can rescue his beloved trapped there. There have also been reports about the similarity with ‘Varsham’ because the producer Sajid Nadiadwala had the rights to remake it in Hindi. While there is a lot of similarity, the martial arts sequences and the rescue makes it different.Watch movie online The Transporter Refueled (2015)

A film like ‘Baaghi’ is a larger-than-life thriller and has to be evaluated in that context. There are some situations that may seem somewhat implausible but if you like the sub-genre of action films, vendetta films and martial arts films or if you like song and dance, this is the film you should watch this weekend! Tiger Shroff will keep you entertained! 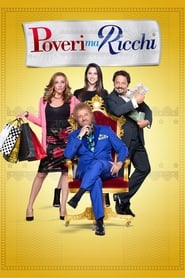 Movie ‘Poveri ma Ricchi’ was released in December 15, 2016 in genre Comedy. Fausto Brizzi was directed this movie and starring by Christian De Sica. This movie tell story about The “Tucci” are a poor Italian family living in a small village in Lazio. Father, mother, a conceited daughter and a genius son, forced to pretend being stupid to keep up with the family. One day something unexpected happens: the family wins one hundred million Euros. Excited, they decide to keep the winning a secret, but as soon as a single word slips out from the mouth of the householder, they only have one choice to avoid being persecuted by friends and acquaintances: run away. They leave at night, heading to Milan. They will realize as soon as they arrive that today’s rich people behaves very differently from the past, and being rich has become a real bother… this discovery will make things way different from what Tuccis’ expected.

Do not miss to Watch movie Poveri ma Ricchi (2016) Online for free with your family. only 2 step you can Watch or download this movie with high quality video. Come and join us! because very much movie can you watch free streaming.

Just watched ‘The Jungle Book’ today. It’s a lovely film. Neel Sethi is fabulous! Great animation and VFX though I’m not sure tigers and bears can climb that high!! It brought back memories of reading ‘The Jungle Book’ during my vacations when I was a little kid. It was a large sized comic with beautiful illustrations printed on thick chrome yellow colored paper. I remember a sequence in ‘The Jungle Book’ comic when Baloo, having participated valiantly in the battle against Sher Khan, is apparently dead. Both Bagheera and Mowgli are grief stricken. Bagheera recalls what a great friend Baloo was to both of them and consoles a heartbroken Mowgli. As Mowgli tears up, suddenly Baloo awakens laughing and they realize he was playing a prank. Bagheera and Mowgli are relieved and thrilled and then the three of them ride off into the sunset. This is a very touching sequence that would have made for a fantastic closing scene. It moved me when I read the comic, as a little kid. I’m quite disappointed that for some reason they chose not to include it in the film. It would have elevated the film further. It’s a nice film for the family nevertheless, unless you want to sneak in your kids to watch ‘Love Games’, which would be hard to explain to a kid anyway, ‘This uncle is going with that aunty and that aunty is..’..never mind!

Every single day, I see people saying ‘Don’t judge anyone’ or ‘Don’t judge women’ through memes, short films and articles in mainstream media. The fact is, everyone is being judged. All the time. Your school teachers judge you to decide if you’re getting promoted or staying back. Your SAT scores decide whether you get into that university you’ve been dreaming of. Your friends on Facebook judge you from your pics and posts. Your employers judge you, to decide whether you move up the ladder or are out of a job. Potential mates judge you to determine if you’re tall/fair/wealthy/easygoing/romantic. Your friends, relatives, acquaintances and neighbors judge you. Your bank judges you when you want a loan for a larger apartment. The government judges you to determine if you’ve paid your taxes. Similarly you judge everyone else, even the government, when you spend all day arguing politics and when you cast your vote. So, judgements are just a part of life. There is no escape. Deal with it. – Vikkramm Chandirramani